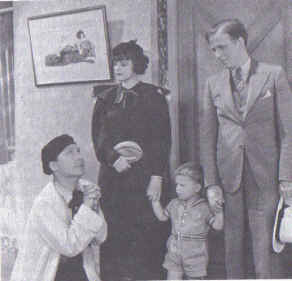 Plot: Spanky's parents are encouraged to get his photo taken by Otto Phocus, the local photographer, but Spanky isn't partial to the idea, especially when he overhears Phocus talking about "shooting" and "cutting" and taking him literally. The gang comes to help Spanky by ruining Phocus's film and accidentally breaking a lens. Spanky's attitude is less than helpful either, often punching the harried photographer to the nose. Finally, dad tries to distract Spanky with one camera as Phocus takes the real shot, but mom gets tangled in the wire. The incident causes Spanky to start laughing. Phocus snaps his picture convinced he has a wonderful photograph, rushing to develop it, but because of the Rascals tampering with his equipment, there's no picture. He rushes to stop Spanky's parents to try one more time, but Spanky has had enough and he pops the relentless photographer on the nose one last time.
Quotes:

Retrieved from "https://ourgang.fandom.com/wiki/Wild_Poses?oldid=16221"
Community content is available under CC-BY-SA unless otherwise noted.