Our Gang Wikia Wiki
Register
Don't have an account?
Sign In
Advertisement
in: Silent Film, 1926, Pet-Related Shorts,
and 3 more 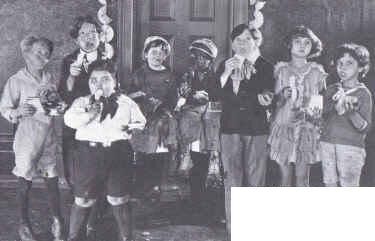 Plot: Professor Clements' Trained Flea and Insect Circus comes to Greenpoint, and Farina goes to see it with his dog, Magnolia, who becomes the unwanted accomplice in the escape of Garfield, the Professor's star. The professor hires the Rascals to find Garfield who escapes with the rest of the fleas to the wedding of Mary's older sister. The fleas are soon all over the house wreaking havoc as everyone, including a garden statue of a discus thrower, is itching and jumping and running for relief.
Quotes: