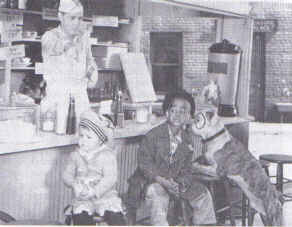 Plot: Accompanied by Spanky and Pete, Stymie is searching for food, ordering food from a vendor but not having the money to pay for it. The gang's upset with Stymie for stealing a pie, but he gets in their good graces again by freeing their dogs from the dog catcher's truck. He's so upset that he snatches Pete, telling Stymie to bring him five dollars if he wants him back. All Stymie can do is pray for the money from Heaven, and a gust of wind promptly blows the money to him from a woman's hand nearby. A policeman tries to get the money back, chasing Stymie through the area. Once he loses the officer, Stymie rushes to the Greenpoint Dog Pound to discover that the vindictive dog catcher has rushed to gas Pete. At that point, an employee remarks that there's no gas to gas anything. The dog catcher opens the hatch to find Pete waiting patiently inside to come out and get his revenge on the dogcatcher before rejoining Stymie.
Quotes:

Retrieved from "https://ourgang.fandom.com/wiki/The_Pooch?oldid=19947"
Community content is available under CC-BY-SA unless otherwise noted.