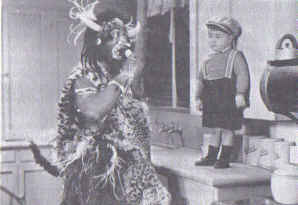 Plot: Dickie, Spanky, and Dorothy have never met their Uncle George, but he has come to Greenpoint with a touring sideshow novelty act with its star attraction, Bumbo - The Kid From Borneo. Although mom loves her brother, dad isn't so crazy about him. Mom sends the kids down to meet their uncle, mistaking Bumbo as their uncle. He seems very docile until he sees Stymie with candy and then goes crazy trying to get it, chasing the Rascals back to the house to get some before Spanky renders him docile again after feeding him everything from the kitchen.
Quotes:

Retrieved from "https://ourgang.fandom.com/wiki/The_Kid_From_Borneo?oldid=20977"
Community content is available under CC-BY-SA unless otherwise noted.