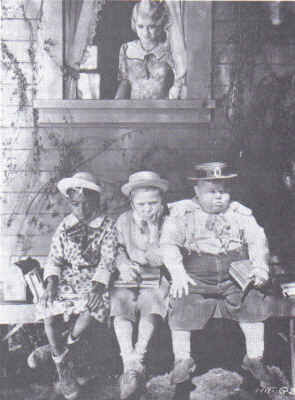 Plot: It's the first day of school, and the gang is moping around on the loss of their teacher, Miss MacGillicuddy who went off and got herself "married." Jackie and Wheezer, meanwhile, are walking to school when they unknowingly accept a ride from a beautiful blonde woman who unbeknownst them is their new teacher, Miss Crabtree. Without identifying herself, she listens to Jackie proudly describe the pranks he and the guys have planned to drive her off the job in order to run off and go swimming. She listenly intently before letting them off a bit before the schoolyard to surprise Jackie later. When she appears in class later, Jackie recognizes her and does a perfect doubletake, trying to slip out of the classroom with a mask on but failing. Miss Crabtree calmly but assuredly collects all the boys pranks: Chubby's red ants, Farina's sneezing powder and Buddy's white mouse. They guys are convinced they are in trouble, hurling names at Jackie as they file past him, but the punishment never comes because the new teacher has planned a get-acquainted day with ice cream and cake. It's also all but too late to cancel Jackie's last stunt, fake notes which are supposed to send the four conspirators home. They only get so far before they turn back to confess, but Jackie can't bring himself to turn himself in, but Miss Crabtree's figured it out herself, bringing ice cream and cake out to him under a tree as a sign of truce.
Quotes: