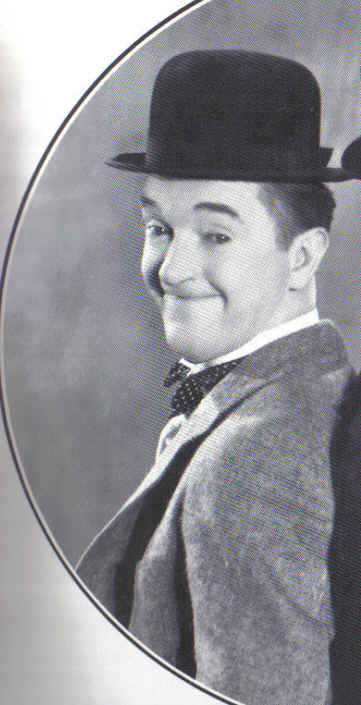 Character: Various
Birthday: June 16, 1890
Place of Birth: Ulverston, England
Date of Death: February 23, 1965
Place of Death: Santa Monica, California
First Short: Seeing The World
Last Short: Wild Poses
Number of Shorts: 2
History: Arthur Stanley Jefferson was the son of British actors who developed a style of comedy from watching the comedians his parents worked with. In school, he refined his comedy before his classmates, encouraged by his teachers to go into the theatre. His father surprised him at one show and soon supported him into the business. Stan worked doing both on-stage and backstage work in the Fred Karno Troupe, becoming an understudy and friend to then unknown Charlie Chaplin. When Chaplin left the troupe in the United States, they dwindled in popularity and Stan jumped into vaudeville, imitating Chaplin with Alice and Baldwin Cooke. He dropped the name "Jefferson," replacing it with "Laurel," later marrying Australian dancer-singer Mae Dahlberg. In 1926, he signed on with Hal Roach Studios.
While under contract to Hal Roach, Stan started working with Oliver Hardy, the two of them developing a friendship and camaraderie that shined through the Laurel & Hardy films. Roach kept them separate contractually to better control their careers. Although Stan never directly worked with the Rascals, he encountered them almost regularly and several of them appeared in their movies. By 1940, when Roach sold the studios, the boys were tired and now dealing directly with M-G-M and Twentieth Century Fox. Where they once had full reign and creative control, they were now forced to rehash old material and routines from their old movies. During the filming of Atoll K (1951), Stan suffered an illness and could only work sporadically in half-hour spurts, dragging out production and increasing tension on the set. It was their last film, but Stan and Ollie returned working together on stage once Stan's health wholly improved. Hal Roach Jr., by now rebuilding his father's business, now wanted them to start doing feature films again, and they were both very eager to do it. Unfortunately, a stroke hit Babe and Stannie lost his partner in 1957.
Despite the loss, Stan kept working and writing material, resolving never to perform again. He lived to the age of 74 before passing away in 1965.

Retrieved from "https://ourgang.fandom.com/wiki/Stan_Laurel?oldid=18466"
Community content is available under CC-BY-SA unless otherwise noted.