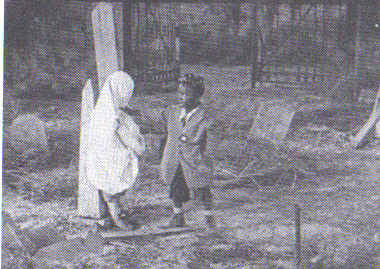 Plot: Farina turns out to be superstitious as Joe Cobb decides to pull a series of practical jokes on him, one of which is a fake cap rifle that hits Farina in the face with smoke no matter where he stands. With the help of Jay R. Smith, Joe has Harry pretend to be dead after Farina brushes him with a voodoo charm, and Farina is given the task of burying him or else be haunted forever. Joe and the gang rush ahead of Farina to the cemetary to scare him with more pranks ranging from puppets, props and costumes. However, in the midst of the frights, an eclipse occurs that ends up terrifying everyone. The wind blows laundry and balloons with faces across the cemetery, heightening the terrifying effect. The grave Farina digs is struck by lightning, creating a hole to an underground mausoleum. Soon Jay and Joe are knocked into it by barn animals, and then Farina drags Harry, wrapped in a sheet, to the hole and rolls him in. Farina exacts some revenge on the gang (except Jackie, who, while trying to run away, gets his pants caught on a branch), by hitting them on their heads with a shovel as they try to climb a ladder out, but eventually is butted into the hole by the same goat that knocked Joe in. With one of the balloon faces stuck on the top of his coat, Farina scares everyone else down there until the balloon pops. The gang finally climbs out just as the eclipse ends, and a final lightning bolt sends them scurrying off into the distance.

Notes/Trivia: This short is included in the Brentwood Home Video DVD.

Retrieved from "https://ourgang.fandom.com/wiki/Spook-Spoofing?oldid=13134"
Community content is available under CC-BY-SA unless otherwise noted.