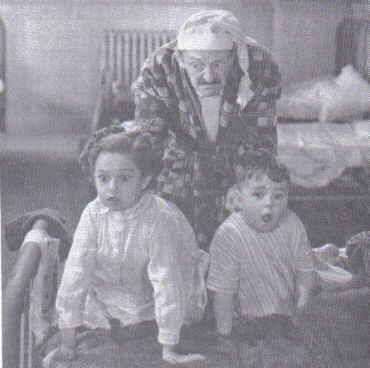 Plot: Wealthy Mr. Wade is the sponsor of the Happy Home Orphanage run by Mr. Crutch and his wife. The orphanage seems like such an idyllic place, and Mr. Crutch acts just like Santa Claus to the kids, but behind the scenes, Crutch is selling their gifts and nice clothes for his own pocket. Mr. Wade throws a party for the kids with Mr. Crutch warning them tio be on their best behavior. At the Wade House, when one of the kids finds a lamp in the bushes offering magic wishes, Mary, Mr. Wade's daughter, wishes she can be a kid again. Her boyfriend, Dick, is roped into the wish, and in a puff of smoke, they're both little kids again. Mary convinces him to dress as the kids and join in with him to play with the little kids for the afternoon, but at evening, they can't convince Mr.Crutch that they don't belong with the other kids. This is when they discover his true side. The orphanage is no where as idyllic as Mary thought it was as the Crutchs take away all the new clothes and toys and force castor oil down their throats before putting them to bed in crampt quarters. Dick struggles to find a place to sleep, finally slipping in between Spanky and Scotty but getting elbowed out from between them. Eager to tell her father the truth, Mary gets to Dick and they both get Spanky's help to escape, the two of them dropping Dick hard to the the sidewalk out front from the upstairs window. He rushes back to get the lamp to become adult ahain and return with Mary's father looking for her. Meanwhile, Mr. Crutch pursues Spanky and Mary through the orphanage and under the beds; the other kids happily making his pursuit as difficult as possible. Coming to the rescue, Mr. Wade enters to find his daughter, but he doesn't recognize her until she becomes adult again in front of everyone. Mary turns Mr. Crutch over to her father as a heartless fraud. Spanky, meanwhile, realizing the potential of the lamp, borrows it from Dick and wishes Mr. Crutch down to his size if but to beat him up for everyone else.
Quotes:

Retrieved from "https://ourgang.fandom.com/wiki/Shrimps_For_A_Day?oldid=18907"
Community content is available under CC-BY-SA unless otherwise noted.