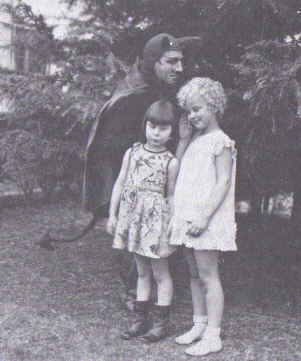 Plot: On Saturday, the gang wants to enjoy the day out of school. Farina has a dream of getting served by a butler. Unfortunately, their parents have other plans, saddling them with chores who warn them the Devil will get them if they don't obey. Farina has to beat carpets, Joe Cobb is stuck chopping wood, but they both run off to join the gang at the park. They laugh at their parent's warnings, but a man dressed as the Devil to promote Mephisto Heaters overhears them. Deciding to scare them into obeying their parents, he chases all the kids back home, warning he'll be back every Saturday if they don't obey. Joe is so scared his mother can't get him to stop chopping wood; she drags him inside and doses him with castor oil. By time the doctor arrives, Joe's pile of wood is bigger than the house! Likewise, Mary Ann pleads for more spinach from her mother, and Farina beats the carpets so well that he leaves nothing left of them. However, Pete isn't so fooled, and he clamps down on the devil's tail and refuses to let go.
Quotes:

Retrieved from "https://ourgang.fandom.com/wiki/Saturday%27s_Lesson?oldid=6645"
Community content is available under CC-BY-SA unless otherwise noted.