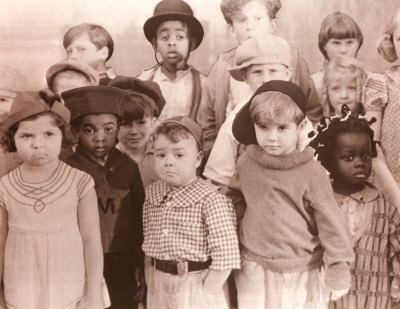 Welcome to Our Gang Wikia Wiki
The wiki about Our gang and the Little Rascals that anyone can edit
1,537 articles since June 2009.

Our Gang was the name of a popular and successful American film series of comedy shorts around a series of child actors known collectively as "The Little Rascals.' Between 1922 and 1944, there were over two hundred and twenty shorts, more than any other film series for a comedy team, using a revolving staple of over two hundred child actors. Several of the kids lasted for as longs as fifteen to twenty short films while others only appeared in five or less. Of these, only about thirty to thirty-five stood out with as many as twenty films to their credit. The series had started out in the Pathe silent film series and later graduated to "talkies," many of which became famous on television through the Fifties and Sixties as "The Little Rascals" TV Series. Our Gang was created by Hal Roach, one of Hollywood's top producers, responsible for launching the careers of Laurel and Hardy, James Finlayson, Harold Lloyd, Fatty Arbuckle, Charley Chase, Thelma Todd and Theda Bara, several of whom even appeared in Our Gang shorts. After leaving Our Gang, several of the Little Rascals went on to work with Groucho Marx, Abbott and Costello, Buster Keaton, Bob Hope and John Wayne. Today, the Our Gang legacy of equality, perseverance and determination is still felt today in modern movies as "The Goonies and "Sandlot."

Contribute to this wiki

To write a new article, just enter the article title in the box below.

Retrieved from "https://ourgang.fandom.com/wiki/Our_Gang_Wikia_Wiki?oldid=3970"
Community content is available under CC-BY-SA unless otherwise noted.