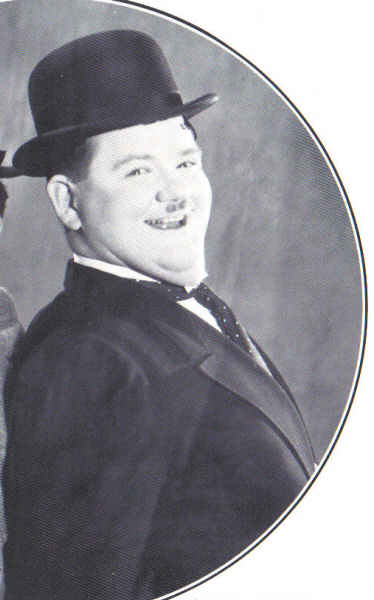 Character: Various
Birthday: January 18, 1892
Place of Birth: Harlem, New York
Date of Death: August 7, 1957
Place of Death: North Hollywood, California
First Short: Thundering Fleas
Last Short: Wild Poses
Number of Shorts: 5
History: Oliver "Babe" Norvell Hardy was born in Harlem, New York to a family from Georgia. His father was a lawyer and politician who died early, forcing the family to return to Madison, Georgia. His mother purchased and ran a hotel, where Babe watched and observed the people that passed through it, using those memories in his later acts. His voice enabled him to join Coburn's Minstrels, but he became homesick and returned home. Later attending the Atlanta Observatory of Music, he briefly studied law at the University of Georgia. His first job was opening and running a movie house, but watching the films showed him what he wanted to do. He started out working as various "heavies" at Lubin Motion Pictures in Jacksonville, Florida where he acquired the nickname, "Babe." Often loaned to other studios, he became friends with Leo McCary at the Hal Roach Studios. In 1926, they gave him a contract.
For Hal Roach, Babe perfected his comedy through numerous shorts and films, gradually becoming familiar with comedian Stan Laurel. He made over 200 films without Stan and more than 100 with him, the two of them building a wide following as one of the most successful comedy teams of all time. Many of their mannerisms and expressions led to the success of the Our Gang films; in fact, the Rascals often slipped over to watch the boys working. Several of the same actors worked in both the highly profitable comedy series. Roach kept the boys under separate contracts to bargain with them separately, but when Roach sold the the studio, the boys lost their creative control. Their later films were not as successful as their early works. They returned to stage work, but Hal Roach Jr., now back in control, called them back. Stan was preparing for their next big feature when Babe was felled by a stroke. Oliver Hardy passed away on August 7, 1957.

Retrieved from "https://ourgang.fandom.com/wiki/Oliver_Hardy?oldid=18465"
Community content is available under CC-BY-SA unless otherwise noted.