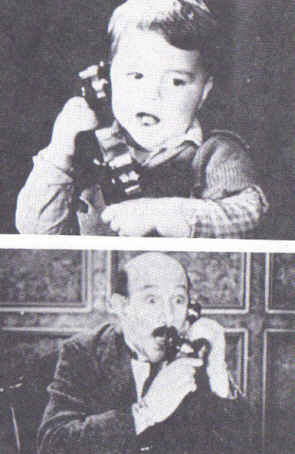 Plot: At the Bleak Hill Boarding School, the students endure without heat and are served cornmeal mush every morning for breakfast. The old lady who runs the place doesn't seem to be happy with her place there, threatening the kids with a whip if they spill milk from a cow. After it's spilled, Dickie and Stymie use a vacuum cleaner to retrieve it. Plaster of Paris accidentally mixed into their food makes for a breakfast that is incapable of being eaten. Her husband, Old Cap just loves the kids there. He is very lenient and informal in the lessons, always promising that things will get better when his back pension comes and he can take them out of the place. Meanwhile, the kids sing songs to his amusement. Spanky recites a jumbled version of "Mary Had A Little Lamb," Stymie fakes his way on a harmonica through "Hungarian Dance #5" and Tommy "Butch" Bond sings "Just Friends (Lovers No More)." When the phone rings, Spanky gets into the winning side of a battle of wits with Mr. Brown down at the First National Bank. The day has finally arrived, and Old Cap finally has his pension of nearly four thousand dollars. He treats the kids to new clothes, new toys, a day at the amusement park and then dinner at a fancy restaurant. For the kids, he orders a fancy French dish called "porrage," only to discover too late that "porrage" is French for mush!
Quotes:

Retrieved from "https://ourgang.fandom.com/wiki/Mush_And_Milk?oldid=19861"
Community content is available under CC-BY-SA unless otherwise noted.