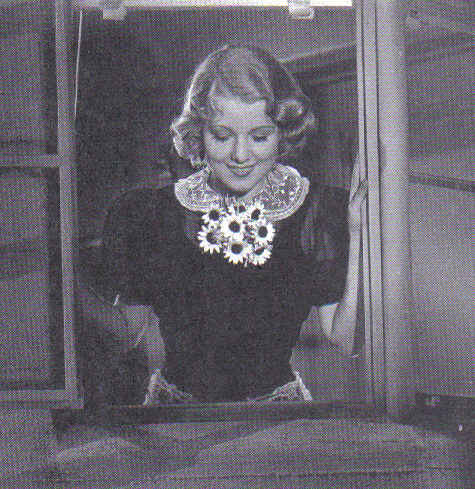 Bio: Miss Jones was the third of the "movie star"-looking teachers of the Little Rascals. While she may not have had her number of young admirers as Miss Crabtree, she did teach class with the same amount of compassion and professionalism as her predecessor at Adams Street Grammar School.
In one "flashback," Miss Jones seems to be the assistant teacher to Miss Argyle, the kid's regular teacher, playing the piano for an Arbor Day ceremony, but she later graduates to being their regular teacher. To start off the new school semester, she treats the kids to ice cream in class in Bored Of Education, a treat which Spanky and Alfalfa nearly miss. She also treats the class to a day at the circus in Spooky Hooky, an event Spanky and Alfalfa do miss after going out in the rain.
Unlike Miss MacGillicuddy, Miss Jones stays on as a teacher after she marries in Teacher's Beau, but she keeps her maiden name instead of using her married name. Her fiance, Ralph Wilson, in order to keep the marriage a surprise from the kids, paints a picture of the new teacher, "Mrs. Wilson," as a "dried-up mean old woman" as a joke, but it's a joke they take seriously so they create a spaghetti dish of Tabasco sauce to convince him not to marry and take away their teacher. Although they learn the truth, it's not enough to stop the the dish from being served, and they take the full brunt of the horrible dish.
(Technically, this Miss Jones was played by a separate actress and could be a separate teacher, but since several adult roles were played by mutiple actors, they were possibly meant to be the same character)
In at least two instances, Miss Jones's efforts to showcase the talents of her students ends up embarrassing them. In Two Too Young, she asks Alfalfa to recite "The Charge of the Light Brigade," but Porky sets off the firecrackers in his pockets at the right moments in the peice. Alfalfa is also another victim of her kindness in Hearts Are Thumps after the gang sabotages his lunch with Darla by spiking his sandwich with soap. All through the song, "Let Me Call You Sweetheart," Alfalfa hiccups soapy bubbles to the stunned surprise of Darla and Miss Jones.
Besides her husband, not much is known about Miss Jones's family. She has a sister who gets married in Three Smart Boys and asks permission from Miss Witherspoon, the superintendant, to take the day off to attend the wedding. Of course, Spanky and the gang are more than happy to oblige in order to miss school, but their efforts aren't required anymore once Miss Witherspoon gives in and decides to give Miss Jones her day off to attend her sister's wedding.
Quotes: None

Retrieved from "https://ourgang.fandom.com/wiki/Miss_Jones?oldid=20679"
Community content is available under CC-BY-SA unless otherwise noted.