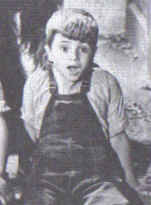 Bio: Mickey Gubitosi is a late member of the Little Rascals, appearing in Greenpoint around 1939. He sort of replaces Porky as the tag-along kid, later becoming Spanky's best friend after Alfalfa and later graduating to leader of the group.
In Dad For A Day, it's discovered that Mickey's father is no longer alive. His mother supports the family by running a coffee shop, but she later remarries Bill Henry, who owns the gas station next door to the coffee shop. Bill has been drinking her coffee from over three years and enjoys it very much, but after marrying Mickey's mom, he discovers he's not fond of her hash in All About Hash. When Mickey learns they are expecting, Mickey discovers a statistic that every every fourth child born is Chinese and takes it literally, thinking his new baby brother will be born Oriental, but Spanky sets him straight. In Baby Blues, Spanky introduces Mickey to his friend Lee Wong to calm him over the idea, but it doesn't prepare Mickey for the revelations that he has after his mother gives birth to two baby girls! He also has an Uncle George who owns a farm in Farm Hands.
Like all the previous Little Rascals, Mickey and the gang attend Adams Street Grammar School where their favorite teacher is Miss Pipps. After she gets in trouble for celebrating Mickey's birthday on school time, the gang and their parents rush to help her save her job in Come Back, Miss Pipps. When he and the gang are not in school, they play baseball, head to the East River to go fishing, or attend the movies. In 1-2-3-Go!, his Our Gang buddies visit him in the hospital after he gets hit by a car during a baseball game. In Mighty Lak A Goat, they get tossed out of school and the theatre because Froggy's formula to clean them up smells so bad. Despite how much they love school, Mickey is not above convincing Buckwheat and Froggy to play hooky in order to go fishing in Three Smart Guys.
Mickey gets to be president of the One For All And All For One Club, but he later runs against Froggy wanting to be president in Election Daze. In the end, the club members are so tired of the squabbling between the two that they elect Janet as president.
Despite what squabbling that does go on, Mickey's best friends after Spanky goes to high school are Buckwheat and Froggy. Mickey sometimes feuds with Slicker Walburn, a local bully who pulls practical jokes on the gang, such as tying their clothes in knots when they go swimming in Fightin' Fools. While Slicker lacks the presence of fear in the neighborhood that Butch instilled, Mickey does create a panic after overhearing Big Shot and Buckwheat talk about giving Smallpox to the gang. In this case, Smallpox is the name of a dog, and the confusion it creates in Tale Of A Dog is called "the worst panic in Greenpoint history." It is also the last known adventure in the history of the Little Rascals.
Quotes:

Retrieved from "https://ourgang.fandom.com/wiki/Mickey_Gubitosi?oldid=20900"
Community content is available under CC-BY-SA unless otherwise noted.