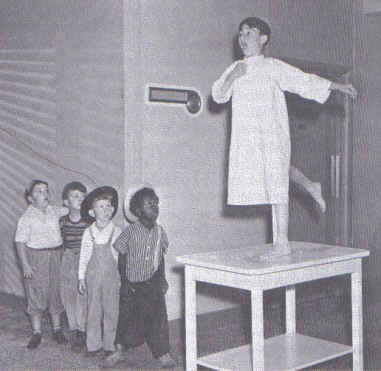 Plot: Darla is in the hospital recuperating after tonsillitis, and the gang, calling themselves the Third Ward Sunshine Spredders Club, heads to the hospital with a picnic basket to help her get better. While waiting to see her, Alfalfa meets a young opportunist who gives him a dime to switch clothes so he can leave the hospital. Alfalfa takes the dime not realizing the boy he is replacing is actually escaping to avoid a tonsillectomy. An orderly arrives to take Alfalfa to surgery not knowing he has the wrong boy. En route, Junior opens a canister of laughing gas sending them out of the elevator completely disoriented. Under the influence of the gas, Alfalfa yells Tarzan-style while riding standing up on a gurney, hides in a baby's crib, and swings from the chandelier in Darla's room before getting dunked with water and shocked back to reality and he turns to the picnic basket for a snack. When the time comes for Darla to leave the hospital, the others are stuck in the children's wing after getting stomachaches from overeating. Darla promises to visit, but Alfalfa asks that she just bring flowers.
Quotes:

Retrieved from "https://ourgang.fandom.com/wiki/Men_In_Fright?oldid=18961"
Community content is available under CC-BY-SA unless otherwise noted.