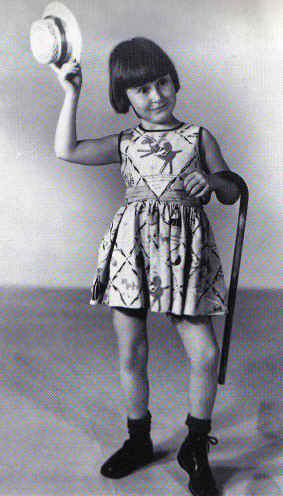 Bio: With her trademark Dutch-cut hair and freckles, Mary Ann is a tomboy through and through. She tends to bite people she doesn't like, like Jack Crabtree when she suspects he's going to marry her teacher in School's Out, and she can be found staying in a tent in her backyard at times, but underneath, there is the heart of a little lady who wants to be loved by the boy of her dreams.
Unfortunately, like several of members of the gang, continuity seems to run fast and loose around her. When she first appears, she's the older sister of Wheezer, who remains one of the few constants in her life but just barely. Their father is an inventor (The Spanking Age), and a widower (Little Mother), who is busy on the road trying to sell a patent. Their stepmother abuses them both in his absence, but their mother's twin sister comes to rescue them after their father sells his patent and wants them to live with him now.
In another version of her life revealed in Small Talk, Mary Ann and Wheezer are actually orphans, and she is left behind at the orphanage after Wheezer is adopted by a rich socialite, who could actually be their aunt, but that fact is left out. Although Wheezer gets new clothes, nice toys and a big house, he misses Mary Ann and his adopted mother adopts Mary Ann as well.
In the third retelling of Mary Ann's life in Bear Shooters, Mary Ann and Wheezer are the younger siblings of Spud Janney, but if the events of Dogs Is Dogs are of any indication, Spud could just be their step-brother. However, in that short, Wheezer's sister isn't Mary Ann but her best friend, Echo, otherwise revealed as Jackie's little sister in another short. There is a difference in the two versions of her stepbrother. In Bear Shooters, her brother, Spud Janney, is a stressed-out whiner whenever he gets saddled with taking care of Wheezer and gets Mary Ann to take care of him so he can go hunting with his friends. In Dogs Is Dogs, Spud Bailey is a little brat who blames Wheezer's dog Pete The Pup for killing the neighbor dogs. If all three versions are accurate, Spud Janney could actually be a cousin of the other three in the same house. However, when Mary Ann's aunt comes to rescue her and Wheezer, this time she says that her father has been very sick. It's almost as if their lives were constantly being rewritten by Hollywood screen writers...
Mary Ann attends school at Adams Street Grammar School in their original one-room schoolhouse with other kids of varied ages as Wheezer plays outside with his friends waiting for her to come out and play. She nearly gets in serious trouble in her homework after buying the answers from Bonedust, who gets his responses from a blackface and minstrel joke book in School's Out. Although she's depicted as a holy terror and a tom-boy, she does have her soft side; she has an unrequited crush on Jackie and is very surprised and flustered when he comes through her window after Jackie's brother, also named Wheezer, locks him out of the house in When The Wind Blows. Jackie, however, only has eyes for his teacher Miss Crabtree, but when he finally decides he likes Mary, she has become the object of affection between him and Harry Spear.
Quotes:

Retrieved from "https://ourgang.fandom.com/wiki/Mary_Ann?oldid=20132"
Community content is available under CC-BY-SA unless otherwise noted.