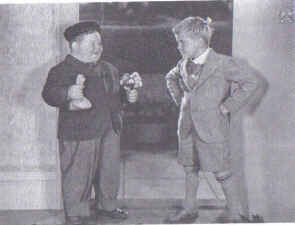 Plot: Wheezer can't sleep at night because Jackie is so infatuated with Miss Crabtree that he talks to her in his sleep. Things are also going to get awkward as the pretty new teacher is now going to be a boarder in the house. Jackie's mother wants the kids to pick up the social graces from her, but mothballs which fell into the dinner stew have the kids imitating her disconcerting reaction to the taste of dinner. Her presence also brings round Chubby to woo her. He's been practicing to romance her on the cardboard cut-out of Greta Garbo at the local Greenpoint Theater. However, Chubby can't seem to get any alone time with Miss Crabtree as Jackie keeps wandering through and distracting him. Jackie even eavesdrops and heckles his best friend to hamper his efforts, but Miss Crabtree keeps her sense of humor amidst all this attention. Eventually, Jackie's mother comes round to find out what's going on and overhears Chubby's declaration of love to his teacher. They sound very familar to her, and no wonder! Wheezer has been selling Chubby her old love notes from Jackie's father to her. When she goes to confront Wheezer over his "business," she finds him asleep in bed with a catcher's mask on and Pete at his side for protection.
Quotes: