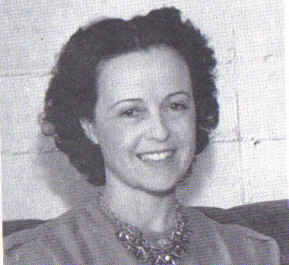 Character: Miss Crabtree
Birthday: November 6, 1903
Place of Birth: St. Cloud, Minnesota
Date of Death: March 10, 1984
Place of Death: Burbank, California
First Short: Teacher's Pet
Last Short: Readin' And Writin'
Number of Shorts: 6
History: June Marlowe was born Gisella Goetten, the daughter of German immigrants in St. Cloud, Minnesota, but the family moved west in the early Twenties for her father's health. She originally studied for a degree in art, but director Mal St. Clair saw her in a stage play and invited her to do a screen test. While under contract to Warner Brothers, producer Sol Lesser renamed her "June Marlowe" and promoted her as "The Most Beautiful Girl On Screen" and "The girl with the soulful eyes." She appeared in several Warner Brothers productions, mostly as an ingenue in several Rin-Tin-Tin movies. In 1925, she was named a Wampas Baby Star by the Western Association of Motion Picture Advertisers whose ranks included Clara Bow, Joan Crawford, Mary Astor, Joan Gaynor and Fay Wray. However, June's acting range was limited and when her contract ran out, she went to Universal Pictures. She did one movie with Rex The Wonder Horse.
Because she spoke German, Universal loaned June over to their Europe-based movie studios for a year of movies overseas. Upon returning stateside, June did her first sound project called "The Lone Defender" for Mascot Pictures who wanted to reunite her with Rin-Tin-Tin, but instead, she started work as the teacher in the Our Gang shorts, wearing a blonde wig over her brunette locks. Robert McGowan had named her character after a former child actress named Lotta Crabtree. The classroom scenes were filmed in what had been a real schoolhouse. Hal Roach had purchased it to keep it from getting torn down, but it no longer exists.
June also did one Laurel & Hardy film, "Pardon Us," and after her Rascal's stint, she did one more movie before leaving acting altogether. She married Rodney Sprigg, a friend of McGowan, who had a moving and storage business. Although confused with two other actresses using the name June Marlowe, she settled in San Diego and enjoyed her time gardening, traveling and with animals and charities. She never had any children of her own. All of her brothers had followed her into the movie business, one as an actor, one as a propman and another as an assitant director, each of them under the name Marlowe. Long after June had left Our Gang, she was still getting fan mail. The short, Teacher's Beau, had been made for her, but she wasn't interested in coming back.
After the Rascal's Revival in the Fifties, June wrote two children's books, "Beesy" and "Furry," until Parkinson's made it hard for her to write. She eventually returned to live in Los Angeles, her husband passing away in 1982. When Leonard Maltin contacted her to send her the first edition copies of his definitive Our Gang book, she already had copies of it. Her return letter had to be dictated as she could no longer write. She passed away in Burbank, California at St. Joseph's Hospital in 1984.

Retrieved from "https://ourgang.fandom.com/wiki/June_Marlowe?oldid=15432"
Community content is available under CC-BY-SA unless otherwise noted.