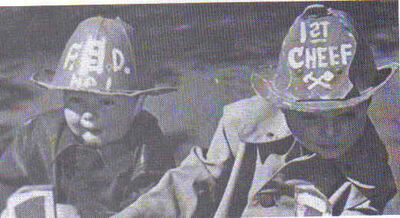 Plot: Due to a shortage of manpower in the city, the public is asked to assist in emergencies involving local fires. Dickie decides to start his own fire department with the gang, possibly reopening the one created in The Fourth Alarm. He takes the role of fire chief with Stymie as his partner, aggravated by his brother, Spanky, constantly needing his medicine. With Breezy Brisbane as lookout, they soon spot the real fire department racing to a fire and the gang rushes to their dog-powered and mule-drawn vehicles clanging through the streets nearly ready to collapse from the weight. Although they quickly lose sight of the real fire engine, they soon find another fire at a nearby warehouse and rush to put it out. Unable to read, Stymie rushes in to dump the boxes and cans marked "dynamite" and "black powder" dangerously close to the others. The explosions rouse the attention of the real firemen who arrive just as the gang puts out the fire, leading to a promise of reward for their brave job.
At that moment, the alarm clock reminding Dickie of Spanky's medicine goes off. All by himself, Spanky pours a spoonful, chugs down the bottle and purposely dumps out the amount in the spoon. When Dickie finally comes over and wants to know where the medicine went, Spanky confesses he gave it to the worms!
Quotes: