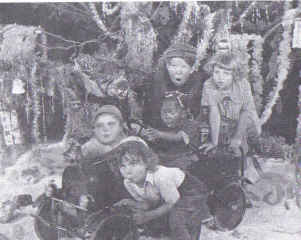 Plot: It's the day before Christmas, and the Rascals have seen too many phony and crooked Santas to believe there is one real Santa Claus. Mickey and Johnny, meanwhile, are touched by the spirit of the real Santa who inspires them to earn the money to help the good cheer of the others. They sell hot bricks to keep feet warm to make some money, buy some gifts, then arrive dressed as Santa with Dinah The Mule dressed up as a reindeer to give out the presents. However, the police is after a band of bootleggers masquerading as Santa, and the gang decides to help gather them up. In the end, they get not only the gifts from Mickey and Johnny but also toys from the bootleggers who filled their bags with both toys and bottles of bootleg in an effort to evade the police.   With so many presents, they have a truly Merry Christmas.
Quotes:

Retrieved from "https://ourgang.fandom.com/wiki/Good_Cheer?oldid=20547"
Community content is available under CC-BY-SA unless otherwise noted.