Our Gang Wikia Wiki
Register
Don't have an account?
Sign In
Advertisement
in: Our Gang Characters, Male Characters, Bookish Characters,
and 6 more 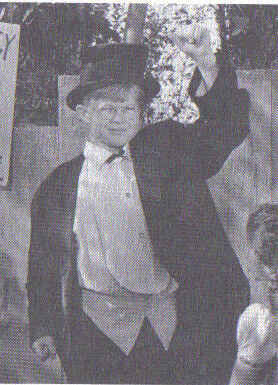 Bio: Harold William Laughlin is a late addition to the gang. Arriving in Greenpoint in 1940, he wears thick glasses to correct his crossed eyes and speaks with a deep raspy "Popeye" voice, thereby earning the name "Froggy," although he is once called "Harold" by his teacher in The New Pupil. It's unknown as to who gave him the "Froggy" moniker (possibly Alfalfa behind the scenes who gave Cornelius his "Corny" moniker), but he very much becomes a member of the gang in their adventures. His voice is enough to cause microphone wires to explode in 1-2-3-Go!.
Like Alfalfa before him, Froggy is an erstwhile little singer in the shows created to raise money. He and the gang play football, go fishing, run a newspaper called "The Greenpoint Flash" in Going To Press and go to war with Slicker Walburn over practical jokes in Fightin' Fools. He also runs against Mickey Gubitosi to be president of the One-For-All-And-All-For-One Club in Election Daze.
In Surprised Parties, it is revealed that Froggy is a Leap Year baby, which means he would have to have been born on February 29, 1932. (Since 1933 was not a Leap Year, this would make him one year older than the actor that plays him.) Not getting to celebrate his real birthday bothers him so much that the gang briefly kicks him out of the club to give him a surprise birthday party in Surprised Parties, but he slips back in disguised as a girl name "Puddin' Tane" and sabotages the party of which he is not a part. When he learns the truth behind the deception, he has to race ahead and set off all his own booby traps.
Froggy dreams of being a comedian, and with the voice, he's almost there. The gang tries to get him started by backing him in his act at the dentist office and at a funeral home in Radio Bugs, but things don't work out for him. It's also discovered that he has a crush on Marilyn Lee, but he can't dance and faints when she tries talking to him in Dancing Romeo.
Quotes:

Froggy As Seen In Other Media

Community content is available under CC-BY-SA unless otherwise noted.
Advertisement