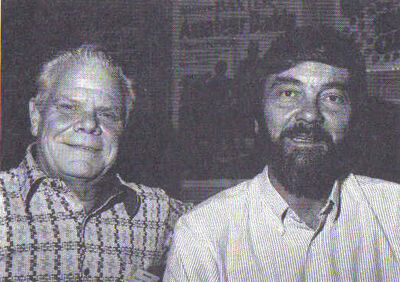 Character: Porky
Birthday: October 25, 1933
Place of Birth: Fort Worth, Texas
Date of Death: October 16, 2005
Place of Death: Minneapolis, Minnesota
First Short: Little Sinner
Last Short: Auto Antics
Number of Shorts: 43
History: Eugene Gordon Lee owes his screen career to his mother. She was so amazed by her adopted son's resemblance to Spanky that she sent his photograph to Hal Roach and ended up landing a screen test that led to him getting cast in Little Sinner, as Spanky's kid brother, all at the age of three-years-old. Much like Tommy Bond's family, they up and moved to California, arriving unannounced at the studios ready for Gordon to work before getting help with lodgings at the Culver City Hotel, a location that appeared in several of shots in the series.
Jackie Cooper once recognized that one had to have a certain "look" to be one of the cast, and while Porky had that look, he grew faster and taller than the rest. He learned to act on the set, but when he left the series to be replaced by Robert Blake, it was a hard time settling into the real world. Just when he could read his own fan mail, it stopped coming.
Gordon learned to put Porky behind him and have a regular life. His father was a mortician and times were often tough so he knew how to appreciate what he had, unlike so many other former child stars. After the Our Gang TV revival, he was slow to embrace Porky again. He began to realize how special his work was to others and started "Otay Products" for licensed merchandise, based on a response he said many times in the series. By time he tried to rebond with Buckwheat, his best friend in the series, it was too late. Buckwheat had passed on, but he made friends with his son. Alfalfa once left a message for him in Lubbock, but he didn't get it in time. His memories include the scary treadmill ride from Hide And Shriek and the smells of the bear suits in Bear Facts.
At one point, Gordon went to court over the use of his likeness by Hanna-Barbera in a cartoon and won a settlement. As a historian, he reviewed his old shorts for his students, many of whom were bothered by the fates of his co-stars. He also tackled with an imposter who had used Gordon's anonymity to benefit himself.
In 1989, Gordon received an award from the Society of Cinephiles for his work in the series. In his later years, Gordon was identified by friends as a tall, intelligent and eloquent man far removed from word-warbling Porky. He still said "Otay" from time to time, but just for the fans.
Gordon was also a big automobile fan, building, buying, restoring and post-war European sports cars. Nine days before his seventy-second birthday, Gordon died after a battle with lung and brain cancer.

Retrieved from "https://ourgang.fandom.com/wiki/Eugene_Lee?oldid=16829"
Community content is available under CC-BY-SA unless otherwise noted.