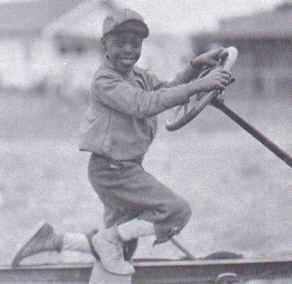 Bio: Ernie "Sunshine Sammy" Morrison is the first real Little Rascal. Everyone else comes after him. His adventures lead to the others wanting to hang around with him and bringing others into the group. It all starts as Ernie and his little brother Farina travel the neighborhood to deliver the laundry their mother takes in to the house. At one time, Ernie thought Farina with his pigtails and long clothes was a little girl and even called him his little sister in Young Sherlocks. For extra money, he shines shoes with Farina whitewashing again to get repeat customers in A Pleasant Journey and even opening his own barbershop in Big Business. In order to pay for apples he swipes at the market, he becomes a fight promoter earning money from his friends to watch Mickey and Jackie fight for Mary Kornman, the lone girl in the group.
In Boys To Board, Ernie gets connected to and seems to later attend Mother Malone's Boarding School, but Farina later attends Adams Street Grammar School. Mother Malone's offers little but fresh air and sunshine, about the only things that are free, and when Ernie leads an escape, Pop Malone goes with them! When he's not in school, Ernie plays baseball in Giants Vs. Yanks and football against the Goose Alley Juniors in No Noise. Mickey is the team captain. When they get tired of their chores, Ernie, Farina, Mickey and Waldemar drift off in a raft to become pirates, but their parents and guardians bring them back. They try again to be pirates in The Buccaneers, this time leading an attack on the U.S. Navy sent to bring them back.
Back home, Ernie and the gang have a club called the Cluck Cluck Klams, replete with white sheets in Lodge Night with little to no knowledge of the sinister terrorist group they are imitating. He also takes over a donkey-powered double-decker bus in Back Stage.
Quotes:

Retrieved from "https://ourgang.fandom.com/wiki/Ernie_%22Sunshine_Sammy%22_Morrison?oldid=14479"
Community content is available under CC-BY-SA unless otherwise noted.