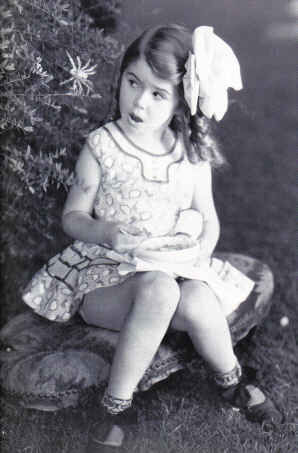 Bio: Echo got her name because she often repeated what she heard from the bigger kids as she heard them. However, what she heard was often similar to but not exactly like she heard. Despite this nickname, the Rascals never refer to her as Echo, but rather simply as 'Dorothy.' When we first meet her, she's the little sister of Jackie Cooper and possibly at least a step-sister to Wheezer who she joins with Stymie in following the kids to school. However, by Teacher's Pet and probably School's Out and Love Business, Dorothy turns out to be the younger sister of Chubby Chaney in another example of the skewered Our Gang continuity. It is hard to tell which of her appearances belong to which character.
Echo starts out as friends with Wheezer and Stymie. In School's Out, the three of them tie their wagon to the back bumper of Miss Crabtree's car to follow along when they don't fit in the teacher's crowded roadster, but it rips the front part of the wagon off when Miss Crabtree drives ahead. When they do get to school, Miss Crabtree gives them apples to eat, but when that isn't enough, the three resort to stealing the desserts of the bigger kids. When they're still hungry, Stymie knows how to get bacon and eggs to "talk" for free breakfast. He pulls this trick on Spud Bailey in Dogs Is Dogs.
Despite that adorable little girl facade, Echo is a tom-boy who enjoys playing in the mud in Pups Is Pups, and Jackie is forever trying to keep her clean. She runs with Dickie Moore's fire-fighting team in Hook And Ladder, rides Stymie's donkey-powered taxi in Free Wheeling, heads to the docks to listen to the tales of the old sea captain in Shiver My Timbers and discovers midget thieves at a garden party in Free Eats. She also helps out Grandma Mack at the general store in Helping Grandma.
When she grows up, Echo eventually starts attending Adams Street Grammar School just as her brother did, but Breezy Brisbane gives her a few dumb phrases to say in order to get himself expelled. Echo later attends Bleak Hill Boarding School in Mush And Milk, but things aren't as good there. There's no heat and all they have to eat is mush, but Old Cap promises better when his pension comes in.
As Dorothy, Echo pops up again as a older sister to Dickie Moore and Spanky in The Kid From Borneo and confuses Bumbo The Wild Man as their Uncle George. This is the third variation of the character. There is a fourth variation where Dorothy isn't a member of the gang, traveling on the train with her mother and encountering Wheezer and Spanky in Choo-Choo. She eventually gets in a fight with Sherwood and later trades clothes with him.
Quotes:

Retrieved from "https://ourgang.fandom.com/wiki/Echo_DeBorba?oldid=20995"
Community content is available under CC-BY-SA unless otherwise noted.