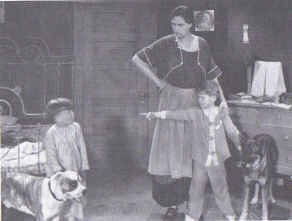 Plot: Wheezer and Dorothy are living a miserable existence with their stepmother who dotes on her real son, Spud Bailey and mistreats Wheezer for letting Pete sleep in bed with him. The only saving grace is his best friend, Stymie, who refers to Wheezer's stepmother as "Old Hatchet-Face." When Stymie comes round looking for breakfast and discovers that Wheezer and Dorothy have not eaten either, he gets Spud to fry up some ham and eggs, telling Spud that "ham and eggs can talk." After easily tricking Spud, the three kids have a nice breakfast. However, as Spud is checking out an uncovered well, his own dog, Nero, pushes him in; he has to rely on Stymie, Wheezer, and Dickie to save him. Spud promises not to tell on them if they pull him up, but when he as at the top of the well, he changes his mind and gets dropped in again. He once again promises not to tell on them if they get him out but he's so rotten, he promises to tell once he's clear out of the well. Meanwhile, Nero has killed one of neighbor Mr. Brown's chickens, and Spud decides to blame Pete to save his own dog. The angered Mr. Brown plans to shoot Pete. In attempt to save Pete, the kids throw eggs at Mr. Brown. Pete is taken away. Wheezer is heartbroken. As he cries outside the Greenpoint Dog Pound, a lady comes around to help get Pete out. The lady turns out to be Wheezer's and Dorothy's wealthy aunt. It seems Wheezer's dad has been sick and couldn't come for his kids, so she has come around to take them home. On the way out, she gives the stepmother a swift kick in the bottom for being nasty. Wheezer is now happy and excited, but he wishes Stymie could come along with him. Little does he know, Stymie is now dressed up in a suit of his own and stowed away on the spare tire to go along with him.
Quotes:

Retrieved from "https://ourgang.fandom.com/wiki/Dogs_Is_Dogs?oldid=20978"
Community content is available under CC-BY-SA unless otherwise noted.