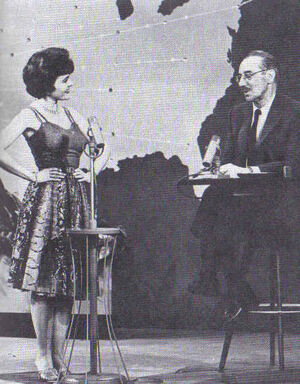 Character: Darla Hood
Birthday: November 8, 1931
Place of Birth: Leedey, Oklahoma
Date of Death: June 13, 1979
Place of Death: North Hollywood, California
First Short: Our Gang Follies Of 1936
Last Short: Wedding Worries
Number of Shorts: 50
History: Darla Hood was the sweetheart heartthrob for boys from 5 to 9 years old and still is for over 50 years. She had a great big beaming smile that made everyone happy. Her likeness in some form or another can be found in practically every form of Our Gang merchandise.
Her mother very nearly named her "Dorla", but one misspelling was all it took to cement her as the one true darling. Her father was a banker, but her mother encouraged her with singing and dancing lessons in Oklahoma City. Casting agent Joe Rivkin discovered her after the conductor of the Edison Hotel in New York City's Times Square put her on stage to sing. Darla was soon whisked off to California with a seven-year contract and quickly written into Our Gang Follies Of 1936, already in production. In that short and during a few more early appearances, Darla had blond hair because she had dyed her hair for another movie role when the Our Gang films were being filmed.
During her Our Gang years, Darla was often lent out to other studios. She handled fame well, but she found it hard dealing with those not in the business after she left. As a teenager, she was part of a vocal group called "Darla Hood and the Enchanters" with her first husband, mostly doing background and off-scene music for films. This work got her into Ken Murray's Blackouts, a long running stage play. At 26, she got to work and appear with Groucho Marx on TV and even pay a comic homage to her film persona in an Our Gang skit with Jack Benny. She was also a regular on Merv Griffin's radio show, wrote song lyrics and made several recordings. In addition to her nightclub act, she made a few movies, but never reached the same stardom she had in Our Gang.
In 1957, she married Jose Granson and soon had a daughter, Darla Jo. Her voice work included TV, movies and commercials. She was the original voice of the mermaid in the first "Chicken of the Sea" commercials. Along the way, she was troubled and embarrassed by Our Gang impostors with weak knowledge of the behind-the-scenes workings. One Darla impostor researched Hood's life so well that she was giving reporters names of Darla's parents and grandmother before she was busted. After the Our Gang TV revival, the real Darla was soon deluged with fan mail she received from young boys who thought she was forever eight years old.
Darla loved her time in the series very well and cherished all her memories. Despite their on-screen romance, she recalled being afraid of Alfalfa at times, but she did have a bit of a crush on Spanky for being wonderful. She also knew Hal Roach as extremely generous, granting her a playhouse she could play in when all she wanted was a dollhouse. For the NBC Little Rascals Christmas Special in 1979, she got to voice Spanky and Porky's mom. She also did a lot of work to get Our Gang accepted into the Sons of the Desert, but before she could appear in the first reunion, she was hospitalized with hepatitis in 1979 and passed away under what Leonard Maltin called "suspicious circumstances," alluding to some sort of urban legend known as "The Little Rascals Curse."

Retrieved from "https://ourgang.fandom.com/wiki/Darla_Jean_Hood?oldid=20843"
Community content is available under CC-BY-SA unless otherwise noted.