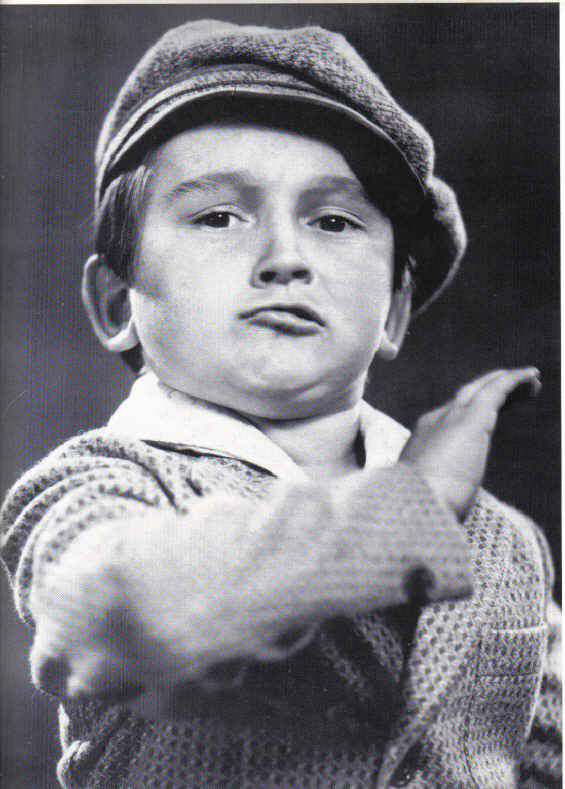 After all of this, Miss Crabtree is more than willing to expel him for being incorrigible, but after what can only be an hour or two of bordom, Breezy starts to realize there was some things about it he did miss, such as the camaraderie of his friends, only to have to go crawling back in Readin' And Writin'.
Other than that incident, Breezy never again does anything to stand out from the gang. He attends a lavish lawn party in Free Eats, pretends to be a fireman with Dickie and Stymie in Hook And Ladder and plays Simon Legree in a production of Uncle Tom's Cabin. Unfortunately, his acting is tempered and interupted by having to take care of his baby brother, Spanky, who left to his own entertainment killing bugs by hammer in the family home, comes across his father's hidden stash of cash in the wall. When Spanky shares the wealth with the neighborhood kids, Breezy's play is interupted by his audience rushing to get the free money!
For some reason, Breezy doesn't stay home at all. In 1941, when Spanky is thirteen years of age in Helping Hands, he remarks on his older brother in boot camp for the U.S. Army. If this is Breezy, he made a wise choice since there is not much call for street conductors anymore.
Quotes: "Boy, do they pick up the nickels!" - Breezy about being a street-car conductor in Readin' And Writin'

Retrieved from "https://ourgang.fandom.com/wiki/Breezy_Brisbane?oldid=4001"
Community content is available under CC-BY-SA unless otherwise noted.