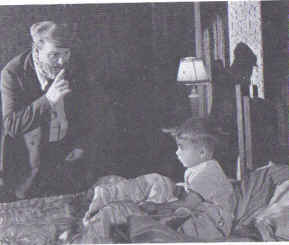 Plot: His big brother, Dickie Moore, is away, and Spanky is going to be sleeping alone for the first time. Dad comes home to dinner announcing that he has made a promotion to shipping clerk manager, which promotes a comedy of misunderstanding and a battle of words between father and son. That night, Spanky is understandably nervous to be sleeping alone, but Dad wants him to tough it out and get used to it. Spanky keeps delaying with tactics like getting a drink of water, if but to wet his whistle. Later, when a burglar enters the house, the nocturnal prowler identifies himself to Spanky as "Santa Claus," and he takes the masked miscreant at his word. However, as the felon is ransacking the house for the silverware, the gang comes around and the commotion rouses Spank's father from his sleep. He ends up in a tussle with the burglar, and Spanky trying to help flings a vase that instead knocks out his own dad. That leaves the gang to handle things just as the police arrive to secure the scene and slap the handcuffs on the crook. As the police are leading "Santa Claus" away, he confesses he's going to jail. Spanky promises to come up and see him there
Quotes:

Retrieved from "https://ourgang.fandom.com/wiki/Bedtime_Worries?oldid=19030"
Community content is available under CC-BY-SA unless otherwise noted.