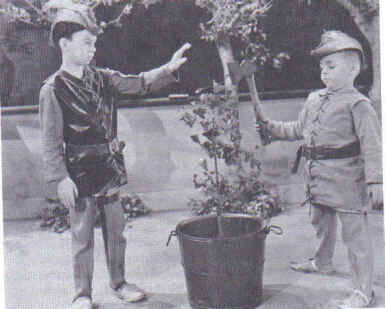 Plot: Two little people from the circus escape for a day off disguised as children, but get picked up by Mr. Smithers, the truant officer, who carts them off to school. The two midgets go along in order to not bust their cover and end up sitting through a Arbor Day Pageant with the regular kids begrudgingly going through the routines. Spanky follows through the tree-planting ceremony, and Buckwheat struggles through his line with coaching from his mother. Spanky plays a woodsman about to chop down a tree as an intro to Alfalfa straining his way through Joyce Kilmer's "Trees." Smithers starts dozing off even as Miss Argyle weeps with joy through the performance. The whole act is an excruciating torment for the two seasoned and experienced little people and they volunteer to follow up with an act of their own which starts out innocent at first and builds to a decadent Vaudeville number too improper for the kids and thankfully too intelligible to understand at all. Their disguises revealed, they are overheard by Murphy, their boss, looking for them who has heard their number and carries them off back to the circus. Principal Cass, the principal, fires Smithers over the embarrassment.
Quotes: